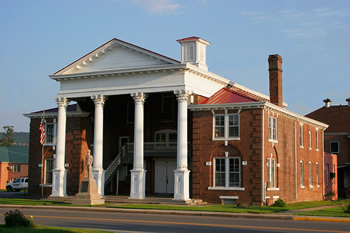 Grant County has Petersburg as the city for its county government. The city was settled by Germans, Scotsmen, and Irishmen. It was named for Jacob Peterson, who operated the first store in the settlement. In 1833 when the first post office was established, the name was changed to Lunice Creek, because Virginia already had a Petersburg. Later when West Virginia was formed the original named was restored. It was incorporated in 1845.

It is a trading center and a center for tourism and sport fishing. The first church in the city was founded as Mount Zion Presbyterian Church by the Rev. William N. Scott. The first church building was destroyed by Union soldiers in the Civil War.

Grant County in the eastern Panhandle is known for livestock, fruit and tobacco farms, grain, and timber.

Grant County was formed in 1866 and named for General Ulysses Simpson Grant who became the eighteenth president of the United States. Grant County is comprised of some 478 square miles in the eastern part of the state. The Fairfax Stone, which marks the southwestern limit of Maryland, is located in the extreme western angle of the county. President Grant's administration was rocked by several scandals, but he was generally considered to possess high personal integrity. He toured the world after finishing his terms of office and was received with high acclaim.

The numbers below should help you find who you need quickly and easily. Please visit our Contact Us page for additional assistance.